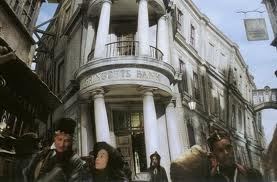 Gringotts is an imposing snow-white multistoried marble building located partway down Diagon Alley, near its intersection with Knockturn Alley, that towers over the neighbouring shops. It is the place where British witches and wizards store their money and other valuables, in heavily-guarded vaults miles below ground.

Gringotts Wizarding Bank is the only bank of the wizarding world, and is owned and operated by none other than goblins. It was created by a goblin called Gringott. In addition to storing money and valuables for wizards and witches, one can go there to exchange Muggle money for wizarding money.

Each wizard and witch may have a vault at Gringotts. Go down to Odessia's Vault, Ryan Dark's Vault, Primrose's Vault and Alex Longbottom's Vault

Retrieved from "https://deatheatersunited.fandom.com/wiki/Gringotts_Wizarding_Bank?oldid=8243"
Community content is available under CC-BY-SA unless otherwise noted.